“That sounds fun,” you respond.

You tuck your feet underneath your knees to sit sideways on the bed facing him. Tom had helped put the blanket in the wash after making a mess on it. You had both stepped into your shower to clean up afterward. Things had become heated again when he couldn’t resist nibbling on the back of your neck while soaping up your breasts. You had started to turn around to face him, but he took your hands and pressed them to the wall, causing you to lean forward and thrust your ass out towards him. He growled and caressed your buttocks before moving behind you and thrusting home again. His hands gripping your hips, he worked your channel under the hot spray of water. The sounds of your fast coupling echoed off the walls of the shower as he pounded into you as best the slippery tiles would allow. As you quivered with the beginnings of your release, he molded himself to your back and bit your shoulder. Your pussy clenched tightly at the sudden mixture of sensations. He thrust a few more times before pulling out and spilling himself on your back.

Your grandmother’s wedding ring quilt is now spread across the bed and you’re discovering more about one another. Your robe is tied loosely around you, barely keeping the appearance of modesty, while Tom has a towel wrapped about his waist. The way he’s sitting though, he might as well not have the towel at all.

“Romeo and Juliet is on at the Globe,” you suggest.

“Maybe we can still get tickets for today’s matinee?”

“If you could travel anywhere, where would it be?”

You bite your lip, tugging on it with your teeth. “You’ll think me silly.”

“Or I could be enthralled by it and want to take you there,” he easily responds.

“I feel most at home in the highlands.”

You nod, recalling he told you his father lives there. “I walk along this one trail. There’s no one else around or nearby. I go to the fairy pools, where I can sit for hours watching nothing and everything. I write or read while I’m there. It’s peaceful. I sometimes sit so still the birds will land on me and pluck at my hair to weave into their nests. A few times I’ve shucked all of my clothes and ran naked through the trees. You’re the first person I’ve told about it. No one else knows I do that.”

“Giving me your cherry on it?” he asked, knowing how dirty it sounded. You look at him with a blush, checking to see if he is laughing at you. What you see is a smile, but not one of mocking. He seems happy to know this special tidbit about you.

You chuckle, “If I were to grant my guarded fruit to anyone… well, you seem a trustworthy sort.”

“I would love to share that with you… but…” He bites his lip hard.

“I never got your name…” He admitted, looking away.

This wasn’t at all like you. You’d invited him home from a club, a stranger, this Tom, Mr. Cambridge, and had sex with him, thrice, and he didn’t even know your name. “I’m called Jazzy.”

“That’s a lovely name. Is it short for Jasmine?”

“It is. My mother met my father while on vacation. She said they fell in love surrounded by the scent of wild jasmine.”

“I like that; it’s so romantic. I should have asked your name sooner. I am unworthy of seeing your secret place,” he tells you, looking away.

“You aren’t Loki trying to pick up Mjolnir.  What are you studying at Cambridge?”

“Mostly the classics. I used to play rugby, but gave it up to pursue acting.”

“You obviously enjoy hearing Shakespeare. Have you performed in any of his plays?”

“What are your most far-fetched dreams and wild aspirations?”

“I’d like to act in a Shakespeare play at The Globe, do some television, and make it big in Hollywood.”

“Maybe someday I’ll get to see you perform. I’ve been studying costume design while pursuing my degree to become a teacher. My mother worked for an old theatre production company and taught me how to design and sew.”

“A teacher? That’s kind of kinky,” Tom admitted. He wondered, briefly, what he was doing telling you that. Where were his manners tonight? Fucking you three times without even asking your name first and now getting hard thinking about being your naughty student in detention. Get a grip on yourself, Tommy boy!

“I am beginning to suspect that you have a few fetishes, Mr. Cambridge.” You aren’t judging him, and hope your laughing smile conveys that to him.

His look turns serious and you wonder if you went too far. “Everyone has them; few are brave enough to admit them and allow themselves to feel pleasure, instead they feel ashamed for their desires.”

You feel chastised for your light teasing about fetishes, but he doesn’t seem offended, merely thoughtful. This would be a worthy man to bandy words with, his intelligence evident in his reply. Bravely pushing forward, you state, “I think you would find great pleasure in having a teacher spank you while you had to recite a Shakespeare soliloquy.” Perhaps, you would be the lucky one to give him such a punishment. You lick your lips in anticipation, imagining controlling the swing of a paddle towards his firm backside. You can fairly hear the thwack of its impact and the slight flinch in his voice as he counts aloud.

Just hearing you utter the words, causes his cock stand at attention again.  It bobs with his sucked in breath, just under the ineffectual towel.

“That’s a rather impressive instrument, by the way.”

“What is?” Tom asks. He groans when your hand grasps his shaft.

“Shall we go for a fourth time?” Inwardly, you think how much of a wanton hussy you must sound to him, but you are rewarded with a heavy-lidded look from Tom. He nods, “fourth…then fifth… yes,” then pulls you over on top of him. Your robe falls open and his towel comes loose as the two of you kiss passionately, your tongues tangling together in a primal dance. You’re too timid to wrest supremacy from him, but you do lead him on a chase to keep control.

The Advent Of Hiddleston – Day 13 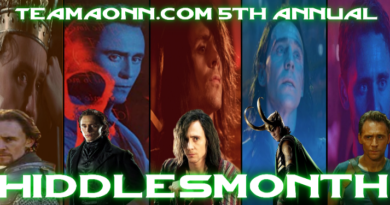